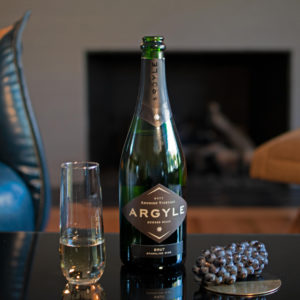 Sign up today to follow special promotions, upcoming events, exclusive wine dinners and limited release wines. As a special thank you, you'll receive 10% off your next Argyle order when you shop online!

*Does not combine with other offers.

With months of no precipitation and several weeks of high temperatures over the summer, it would be understandable if folks in the wine industry were more than a little worried about the quality and quantity of this year’s grape crop.

But interviews with several vintners indicates most are taking it in stride. Others, meanwhile, are positively effusive about the results.

“An absolute classic, superb, healthy, spritely, truly Oregon vintage,” said Jason Lett of Eyrie Vineyards. “With the richness of the warm summer, these super cold nights, a little shot of rain at the right time, and a long run of sunny, cool fall days … I haven’t seen anything this great since the 80s. Maybe 1976 all over again? Amazing!”

“A massive effort to remove fruit clusters was necessary to bring the potentially huge crop back into reality,” he said. “If the vineyard was managed to retain soil moisture or had access to irrigation, the hot weather of August was not an issue. It’s well known that the best aging wines of the Willamette Valley came from vintages where the fruit ripens end of September and beyond.”

ROCO harvested grapes from 46 acres at eight sites, primarily during the last two weeks of September and in early October; cold rain delayed the sparkling wine fruit harvest until late September. “It was like the seventh game of the 2016 World Series’ rain delay,” Soles said. “(The) last fruit picked was Oct. 10. Classic fall harvest condition.”

Nate Klosterman, winemaker at Argyle Winery, said yields were slightly above normal and that the “mild and relatively dry September/October weather has allowed us to reach mature fruit flavors and high quality wines. The couple of extreme heat waves were earlier in the growing season and did not have an impact on grape quality.”

A census of last year’s wine production, produced by Southern Oregon University, showed that 2016 saw increases in domestic sales, but a reduction in vineyard production. Pinot noir accounted for 64 percent of all planted acreage and 57 percent of production in 2016.

The north Willamette Valley led the state with 73 percent of total tons of grapes crushed and the number of wineries increased statewide in 2016 from 702 to 725. Nearly 3.4 million cases of wine were sold last year, an increase that could be attributed to a 14 percent jump in national sales.

Data for the 2017 season will not be available until later in the year, according to Emily Petterson of the Willamette Valley Wineries Association.

Now that the 2017 crop has been picked, the work to craft it into delicious wine has begun. Klosterman explained the process at his winery: “The white wines have been pressed, racked and are now fermenting in barrels and tanks. The red wines are currently fermenting on their skins, waiting to be pressed and aged in barrel. Once fermentation is complete, the still wines will age 10 to 16 months before bottling. The sparkling wine will be bottled in the spring, where it will undergo a secondary fermentation in bottle and aged on the yeast for three to 10 years before disgorgement and release.